The first reopening date for Rian’s Fatted Calf Meat Shoppe in Bowling Green was in August. Then October. Then the first week of December. And now the store’s owners are hoping to welcome back customers after Christmas, but there’s no way to know when the rest of the supplies and equipment needed to get the store back online will be delivered.

That’s been the theme of the past year for the store’s owner, Rian Barefoot.

“That’s kinda where we’re at now, it’s been a long year. Hopefully, we’ve got one more step to take and we’re gonna be open. That’s what we’re waiting for right now. We have light at the end of the tunnel, to put it that way. We’re almost there,” Barefoot said.

Barefoot runs the Fatted Calf with his wife, son, and other family members. In the early hours of December 11th, 2021, his family combed through the wreckage to find a building partially destroyed by the powerful tornado that struck Bowling Green.

Many of the Fatted Calf’s neighbors on Bowling Green’s 31-W Bypass fell victim to the storm. The area joins Russellville Road and the Transpark as the city’s primary commercial districts to sustain damage. Rebuilding has been a collaboration between the businesses themselves, government agencies, and local nonprofits. Brent Childers is a key leader in recovery efforts as director of neighborhood and community services for the city, and head of the Bowling Green-Warren County Long Term Disaster Recovery Group.

Businesses like the Fatted Calf need a permit to renovate or rebuild their facilities. Childers said some business owners chose not to return after the storms, either entering an early retirement or moving elsewhere. Of those choosing to rebuild, many are facing significant setbacks. Childers said the recovery process for the commercial sector is much slower than residential rebuilding.

“It was slow in the beginning and I think that was really related to the insurance. It seems like the commercial was a lot slower to get started but it’s picking up steam. We’ve seen some of our commercial corridors start picking up,” Childers said.

The city of Bowling Green offered rebates on net profit returns and property taxes for businesses choosing to rebuild. Rian Barefoot credits the city for helping to make his store’s renovation possible.

“The property tax thing for the businesses that were hit was a very nice thing that they did to help us out. I can’t thank them enough for what they’ve done,” Barefoot said.

Getting through the first year after the disaster is just one piece of the larger recovery puzzle. Childers said the community support for the businesses hit by the tornado is the strongest indicator of success moving forward.

Barefoot said the community wrapped its arms around the Fatted Calf after the storm, and it’s still feeling the love today.

“It’s been a year. And I still get calls and people wanting to buy gift cards to support us. The people in this community are still wanting to help and that’s an amazing thing. You don’t have that in every town.”

While the family crew at the Fatted Calf wait for the final equipment deliveries for their shop, crews continue preparing the building to welcome back customers eager to close the chapter of tornado-stricken storefronts and move forward in recovery. 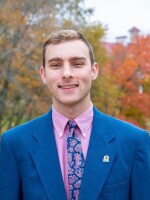 Dalton York
Dalton York joined WKU Public Radio in December 2021 as a reporter and host of Morning Edition. He graduated summa cum laude with a B.S. in History from Murray State University, and was named MSU's Outstanding Senior Man for fall 2021. He previously served as a student reporter and All Things Considered host for WKMS, part of the Kentucky Public Radio network. He has won multiple Kentucky Associated Press Awards and Impact Broadcast Awards from the Kentucky Broadcasters Association. A native of Marshall County, Dalton is a proud product of his tight-knit community.
See stories by Dalton York
Latest Stories
Related Content