As anniversary of deadly tornadoes nears, mental health experts are on alert

Survivors can suffer long-term emotional trauma; they should pay attention to their moods, offer or reach out early for help

This story discusses suicide. If you or someone you know is contemplating suicide, please call or text the National Suicide Prevention Lifeline at 988.

But even the devastation he saw in combat didn’t compare to the leveling of Mayfield after an EF4 tornado going upwards of 200 miles an hour tore through Kentucky, destroying homes and killing dozens in December 2021.

Bowen, who lost his job at the Graves County Jail when the twister destroyed it, now runs a small support group in Marshall County through Project Recovery for those impacted by the storms.

In addition to his law enforcement background, Bowen has a degree in psychology and quickly saw the need for more mental-health services in the area. So, he joined Project Recovery, an organization that aims to help people recover from disasters.

He quickly saw the mental health fallout was worse than he’d realized among his neighbors. He wasn’t immune, either.

“I’ve seen buildings burned out and blown up. I’d seen vehicles turned upside down and on fire,” he said. “I’ve seen all that stuff. And I remember, to this day, when I started driving around Mayfield the next day (after the tornadoes), I was like: ‘I have never seen anything like this before.’ It was totally worse than any war zone I’ve ever seen.”

Seeing the devastation all around him, he said, “affected me very heavily and mentally and cognitively.”

Some of Bowen’s clients have already noted the changing weather to him, the cycles of warm and cold.

“That’s the exact same kind of environment that we had last year, so a lot of them are pretty scared,” he told the Kentucky Lantern. “First thing they tell me is: ‘Is it going to happen again?’ All I can say is, ‘I don’t know.’”

Bowen can’t control the weather, but he’s focused on getting his clients to meditate, practice mindfulness or listen to calming music or sounds like the chirp of crickets or a running creek.

Leah Fondaw is a licensed clinical social worker and the vice president of clinical services at Four Rivers Behavioral Health, a nonprofit that services West Kentucky. She said there is concern as Dec. 10 approaches despite the healing that has happened over the last months.

“Anniversaries can be a triggering event,” she acknowledged. She’s prepared postcards for distribution on the anniversary that offer advice for coping with trauma such as focusing on deep breathing, practicing mindfulness and finding someone to talk to — whether it’s a therapist, friend or even a stranger.

Dr. Eric Russ, the executive director of the Kentucky Psychological Association who is also a clinician with the Louisville Psychotherapy Group, said there isn’t a ton of research into disaster anniversary reactions, but “what we know is that folks who struggle with reactions to a traumatic event, so whether that’s PTSD, or depression or anxiety or substance use, tend to have kind of a surge in their symptoms.”

A 2012 study out of Princeton University found that even five years after the deadly Hurricane Katrina that killed almost 2,000 people, survivors still experienced mental-health challenges.

“On average, people were not back to baseline mental health and they were showing pretty high levels of post-traumatic stress symptoms,” study author Christina Paxson said at the time. “I think the lesson for treatment of mental health conditions is don’t think it’s over after a year. It isn’t.”

Marcie Timmerman, executive director for Kentucky’s chapter of Mental Health of America, said there is an “upward trend of interpersonal domestic violence, murder-suicides and suicides” in the aftermath of disasters like last December’s tornadoes, particularly in the first three years.

The depression collides with the end of initial federal support, Timmerman said, and some might notice that “some people are better off already … some people are starting to get their lives back together, but not everyone is.”

“The emotional blowback takes a while,” Timmerman said. “You’re kind of in that emergency mode for a while … until the basic needs are met. And for some people, unfortunately, that emergency mode doesn’t cease at the end of the year. So that adds a lot of extra stress.”

Tornado survivors — and their friends — can be on the lookout for these suicide warning signs, Timmerman said:

Be careful not to assume someone who reached out for help before will do it again, Timmerman said, adding, “our largest rate of loss of folks by suicide is in, like, three to six months after they’ve seen a provider. So we want to make sure we’re continuing that follow-up support as friends and family members.”

And, she said, asking someone specifically if they’re having thoughts of ending their life is not a harmful question. In fact, if someone is feeling suicidal, they will likely feel relief that someone is seeing and acknowledging their pain.

Anyone who is having suicidal thoughts or sees a friend who they think needs help can call or text the Suicide and Crisis Lifeline at 988 for help and support.

Especially as the tornado anniversary, and with it, the holiday season, approach, it’s important to surround yourself with community, these experts say.

“If you’re somebody who has been struggling with suicidality as part of your recovery, it would be a time where you want to do some extra planning for yourself about how to take care of yourself,” Russ said, “about how you want to spend the day or the week and what resources you can draw on to get yourself some extra support.”

Fondaw, who has also worked as a grief counselor and compared the tornado recovery to the grieving process, agreed. Pay attention to the day, she said, and don’t ignore it.

The National Suicide Prevention Lifeline is also a good resource if thoughts haven’t progressed as far as suicidal ideation, Russ said, adding that “in general, people wait too long to reach out for help.”

This story was originally published by the Kentucky Lantern. 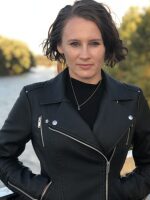