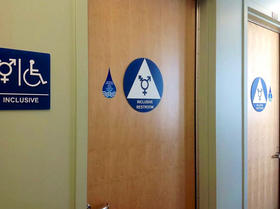 Director of Kentucky’s Fairness Campaign Chris Hartman says he anticipates the Republican-controlled Senate will pass a bill requiring students to use school bathrooms corresponding with their biological sex, but that it will stall in the Democrat-held state House of Representatives.

“I cannot imagine that the Kentucky House is going to waste as much time prioritizing an issue of discrimination as the Senate has,” Hartman said.”

Hartman said the Kentucky House has more important issues to address in this year’s General Assembly.

“I think they’ll tend to those issues of importance rather than wasting their time on an issue that is currently being handled quite well by local jurisdiction, by school principals, superintendents and school boards in their home districts where they know what’s best for what works on the ground,” Hartman said.

Louisville’s Atherton High School notably implemented a policy that allowed transgender students to use bathrooms that corresponded with their gender identification. At least one Atherton student testified in favor of the bill before it passed the Senate Education Committee Monday night. The female student said she was "uncomfortable" with biological males using the girls' bathroom.

Paducah Senator Danny Carroll has been on record as supporting the bill to provide protection to privacy rights for non-transgender students.

The bill, SB 76, was sponsored by Republican state Sen. C.B. Embry Jr. of Morganfield. The bill allows for the "best possible accommodation" to transgender students without letting them use a restroom that doesn't correspond with their biological sex. In the bill's language, this includes unisex bathrooms, single-stall bathrooms or controlled use of faculty restrooms or showers.

Organizers currently have more than 300 signatures on a petition circulating the school. The petition requests teachers call students by their preferred pronouns and to allow students to use bathrooms for the gender of their choosing.  Currently transgender students are asked to use handicap/unisex restrooms. The Madisonville Messenger’s Lead Reporter Jessica Dockery covered the weekend rally.

“The students did have a lot of support it seemed by folks driving by, honking their horns hollering positive things outside of the windows,” said Dockery.  “I didn’t really see any negative reactions from the community while I was there. “

Dockery said the organizers of the rally are trying to promote awareness.

A Madisonville North Hopkins County High School transgender student is working on a petition to allow him to use the bathroom he chooses instead of the handicap one made available for those who identify as transgender.

School officials haven’t yet received the petition, but say they’ll seek legal guidance although they aren’t aware of any laws regulating bathroom use.

Meanwhile State Senator C.B. Embry filed a bill this month requiring students use the restroom corresponding to their anatomical gender.

Fairness Campaign Director Chris Hartman says the bill comes after a Louisville high school allowed a transgender girl to use the women’s restroom and locker room, which he says is the best option.

“When we force a trans student to use a private restroom, a handicap facility, what that does is it says you are so different that we don’t know how to accommodate you other than to isolate you and force you to use this restroom that’s all yours,” Hartman said.

Embry filed the bill after the Kentucky Family Foundation approached him with a draft of it.